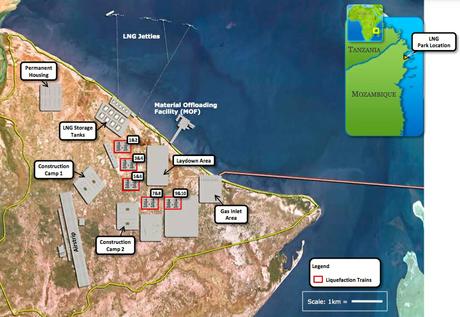 HOUSTON, Dec. 21, 2012 – Anadarko Petroleum Corporation (NYSE: APC) today announced that it has reached Heads of Agreement (HOA) with Eni, establishing foundational principles for the coordinated development of the common natural gas reservoirs spanning both Mozambique’s Offshore Area 1 (operated by Anadarko) and Offshore Area 4 (operated by Eni). The HOA is designed to facilitate a work program whereby the two operators will conduct separate, yet coordinated, offshore development activities, while jointly planning and constructing common onshore liquefaction facilities in the form of an LNG (liquefied natural gas) park in the Cabo Delgado Province of northern Mozambique.

“Reaching an HOA with Eni is a significant step that preserves the project timeline,” said Anadarko President and CEO Al Walker. “We expect the HOA to lead to a unitization agreement to further facilitate the efficient development of the common resources, as well as the independent reservoirs on both blocks, enabling enhanced economies of scale through shared infrastructure and facilities. Our commercial and technical teams have proven the ability to work collaboratively through these discussions, as we work alongside the Mozambican government toward a shared target of first LNG cargoes in 2018.”

In addition, multiple FEED contracts have been awarded for both onshore LNG construction and offshore installation.

“We are very pleased to also announce the awarding of multiple FEED contracts advancing the onshore and offshore components of this LNG project in northern Mozambique,” continued Walker. “Awarding FEED is an important event for Mozambique, as it marks a significant milestone in the development cycle of this project. We are pleased with the alignment of our co-venturers and 2 grateful for the support of ENH and the government of Mozambique in moving this world-scale project forward.”

The offshore FEEDs will be effective immediately following contract finalization and will focus on Area 1 subsea production systems for the Prosperidade complex. The FEEDs will each culminate with the delivery of a full engineering, procurement, installation and commissioning plan for the Offshore Area 1 development.

The FEEDs will develop an overall LNG park plan allowing the capability to produce approximately 50 million tonnes of LNG per annum (MMTPA) in future years. Each of the LNG FEEDs will deliver designs for an initial development consisting of four liquefaction trains with capacity of 5 MMTPA per train. The FEEDs will culminate in the delivery of a full engineering, procurement and construction plan, and a lump-sum turnkey price for the initial two 5-MMTPA trains, as well as associated common facilities. Specifics regarding the second two 5-MMTPA trains will be developed during the FEED process.

Details regarding the awarding of FEED contracts for the offshore installation and onshore LNG construction, as well as conceptual diagrams of the LNG park can be found in the supplemental information attached to this news release or on our website at www.anadarko.com.

Anadarko Petroleum Corporation’s mission is to deliver a competitive and sustainable rate of return to shareholders by exploring for, acquiring and developing oil and natural gas resources vital to the world’s health and welfare. As of year-end 2011, the company had approximately 2.54 billion barrels-equivalent of proved reserves, making it one of the world’s largest independent exploration and production companies. For more information about Anadarko and APC Flash Feed updates, please visit www.anadarko.com.