The Partners and Investors of Pembaland are a Mozambican, North American and European consortium. Their local experiences in real estate development, construction, finance, hospitality, law and the service industry provides a solid grounding for Cabo Delgado operations.

Gabriel is a Mozambican, Italian and American national and has lived in Mozambique for over a decade. He holds an BA in economics from Princeton University and a MBA from the University of Cape Town GSB. He has worked in both the consulting and philanthropic sectors, working for a Mozambican Management Consulting firm, EUROSIS, and as a Director at the Maria de Lurdes Mutola Foundation in Maputo. He is a founder/investor of: a hospitality and fleet management company (Fossati-Moiane), an oil & gas services company (Mozrel) and a procurement & logistics firm (Upstream Procurement Mozambique). Gabriel divides his time between Maputo, Pemba and the other Mozambican cities where Pembaland companies are currently operating.

Celso is a Mozambican national who lived ten years in South Africa Studying B.Com Marketing. He previously worked for Mcel in the Marketing department, Soico, the largest independent media company as a Sales Manager. Celso is a Director of Kal-El, a Mozambican Company, whose core activities include the provision of alternative construction materials based on new and fast building technologies to large-scale development in Maputo. Their recent expansion of product services has given rise to the provision of materials to many of the new developments in Maputo city. Celso speaks Portuguese, English, and Afrikaans. 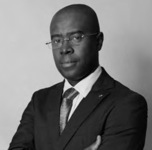 Egideo has held senior positions in both multinational corporations in construction, mining a Director in Vale and as well as Chairman and CEO of national Mozambican entities, such as Africa’s second largest hydroelectric power generation project in Africa, Mphanda Nkuwa. Egideo graduated with a BS in Geology by the Universidade Eduardo Mondlane in Mozambique with Post Graduation in Decentralized Planning For Rural Development by the National Institute for Rural Development in Hyderbad, India. He also holds a MA in International Development from Clark University in Worcester, Massachusetts, USA and has a diploma in African Leadership Program by NEPAD and Wits Business School, South Africa.

Brian has a degree in Business Studies from Dublin City University in Ireland and has passed both Level 1 and Level 2 of the Chartered Financial Analyst (CFA) programme. Brian spent his early career with Heineken Deutschland and Vodafone Ireland in sales and marketing. Prior to joining Pembaland Brian had been working in Africa with Southern Cross International, a financial advisory firm, for nine years holding various roles, ultimately that of Sales Director. Brian has lived and worked in Ireland, Germany, USA, Zambia, Mozambique, Angola and South Africa. He speaks English, German and Portuguese and divides his time between Johannesburg and Pemba.